Digitization of thousands of educational books since the 19th century

TREK Consulting successfully completed a unique project for the educational and scientific community in Greece: the creation of a public digital library providing open access to historical school textbooks used in the educational process from the 19th century till the early 1980s. The 900.000 EUR project is expected to provide assistance and reference online material to the majority of the academic community, as well as to act as a cultural and educational beacon for Greece and abroad. 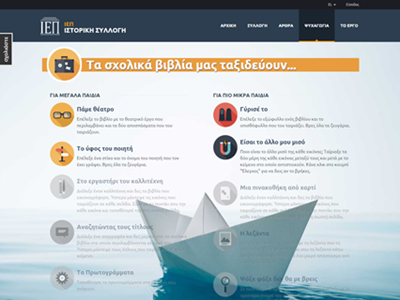 Cataloguing, digitization and scientific documentation of approximately 6.000 school textbooks numbering more than 1.000.000 pages in total Digitization of the accompanied curricula of the same period, which include the objectives and priorities of the education policy adopted by the Greek State Adoption of widely accepted and interoperable metadata standards to ensure viability and extensibility of the produced content Effective management and projection of the scientific documentation and its corresponding digitized content

The digital library offers open access to school teachers, academic staff, researchers and the general public through a plethora of services: Personalized navigation and advanced search facilities providing visitors with the ability to explore how the educational process has evolved throughout the years Interactive timeline illustrating the most representative textbooks taught in Greek schools since the establishment of the Greek State Serious games for students of primary and secondary education Guidelines and proposed activities for school teachers to optimally utilize the digitized collection inside the class Responsive web layout and native mobile apps for Android and iOS environments.