Μαϊ 2007
TREK to implement Schengen Agreement policies and technical Advisory among Greece and European states which allows the abolition of systematic border controls between the participating countries. 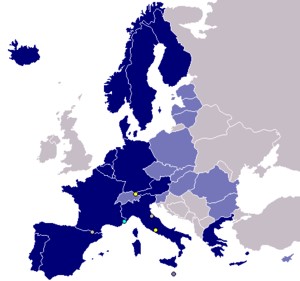 The 1985 Schengen Agreement is an agreement among European states which allows for the abolition of systematic border controls between the participating countries. It also includes provisions on common policy on the temporary entry of persons (including the Schengen Visa), the harmonisation of external border controls and cross-border police co-operation. "Schengen countries", are obliged to cope with Pan-European standards concerning VISA issue and relative management procedures. The new system will allow deployment and facilitation of common procedures across Europe, more flexibility and interoperability among Schengen terittories. To this purpose TREK awarded by the Ministry of Foreign Affairs, Greece the design and monitor of implementation of the new VISA Information System, according to Pan-european standards and interoperability. Within the 20 month project scope is the design of the IS system, Telecommunications and Infrastructure identification for purchase and production of functional as well as Technical specs. Project foresees also assesment study on security issues, roll-out to 120 Consulates across the globe, Publicity and awareness actions, as well as Technical asssistance for the smooth project implementation. Budget is 665.000 euros.
The Schengen Information System, also called  "SIS" is a secure governmental database system used by several European countries for the purpose of maintaining and distributing information related to border security and law enforcement. The data collected concern certain classes of persons and property. This information is shared among the participating countries of the Schengen Agreement Application Convention (SAAC), originally France, Germany, Belgium the Netherlands and Luxembourg. Since its creation, several other countries, Spain, Portugal, Italy, Austria, Greece, Finland, Sweden, Denmark, Iceland and Norway have joined the system. Currently the Schengen Information System is used by 15 countries. It should be noted that among them, only Iceland and Norway are not members of the European Union.  As for the Republic of Ireland and the United Kingdom, which did not sign the SAAC, they take part in the Schengen co-operation under the terms of the Treaty of Amsterdam which introduced the provisions of Schengen Acquis into the European Union. Ireland and the United Kingdom will mainly use the Schengen Information System for law enforcement purposes.

This VIS system, to be designed by TREK is an innovator as regards State-to-State operation, legally speaking as well as technically: